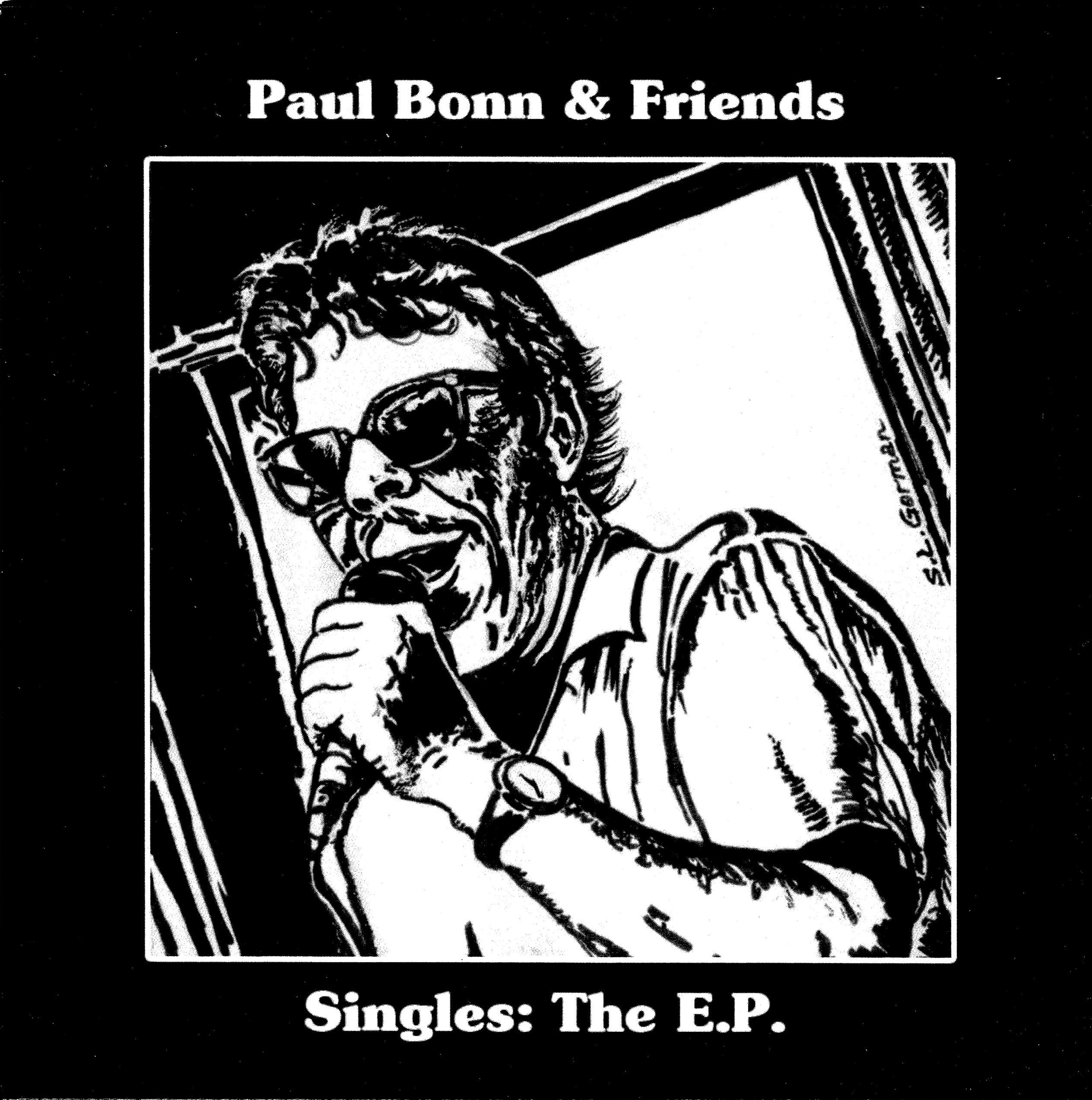 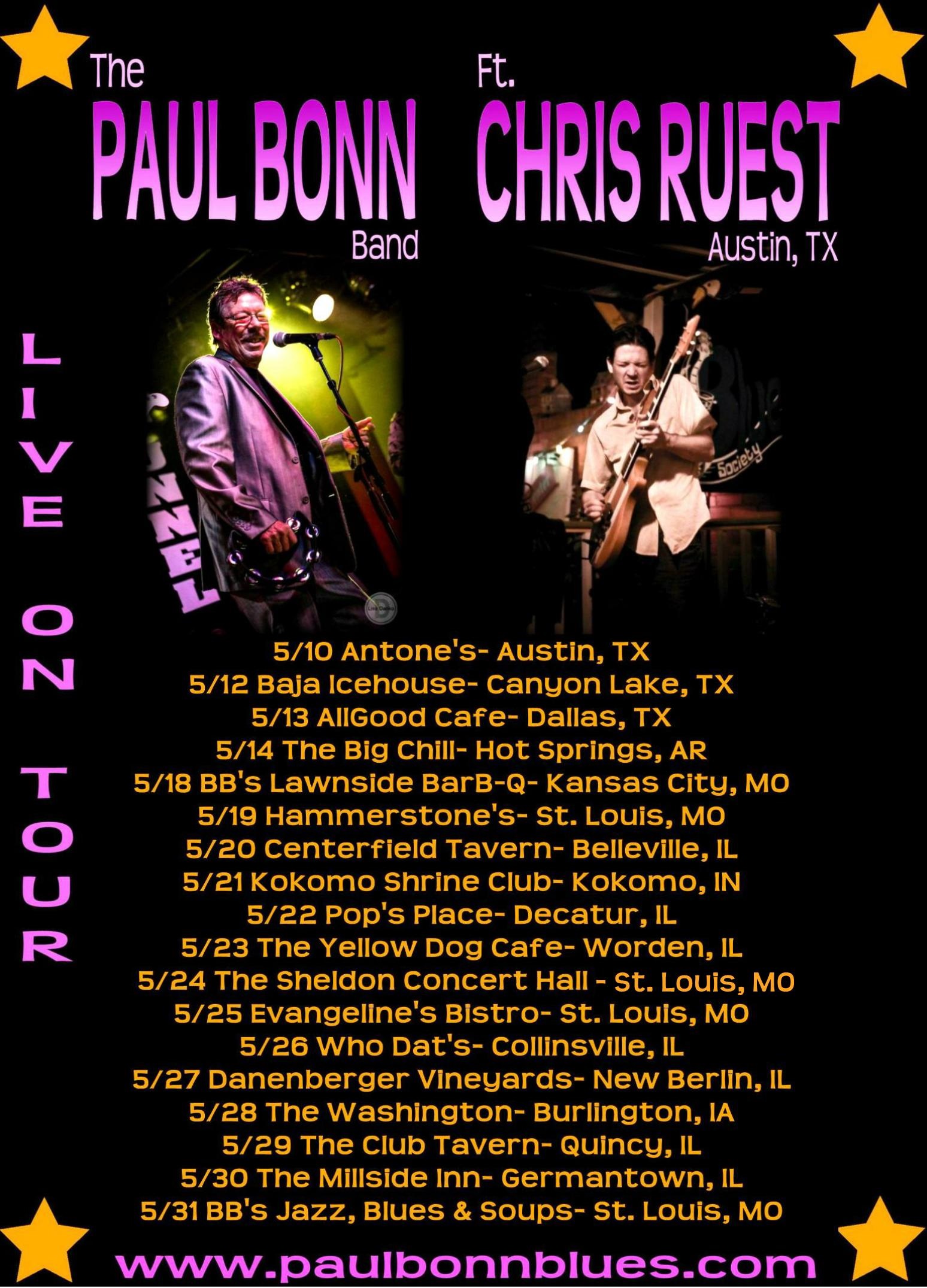 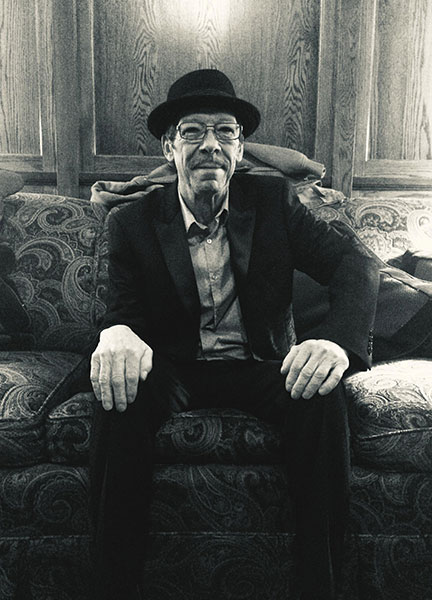 Singer and entertainer Paul Bonn has been electrifying audiences for more than fifty years throughout the Midwest. His band feature some of the finest players from the St. Louis area, with decades of experience performing throughout the world. Their material includes traditional blues, soul, R&B and swampy Lousiana classics and originals.

With the successful release of Paul’s debut solo effort “50 Years” in January 2017, the group has been charging forward full throttle, touring the Midwest and constantly performing around St. Louis.

A brutally humid 2005 STL summer’s eve, and Paul Bonn sings with The Hard Tale Blues Band at Beale On Broadway. The air is so stifling, Bonn’s glasses keep fogging up. I’d never seen him before, but there he is in all his glory, shaking maracas and shimmying hypnotically into the crowd. The song ‘The Tiki Bar Is Open’ is classic John Hiatt, yet, Paul’s voice churns a rhythmic original. The crowd’s spirit lifts as Bonn’s fogged, smiling gaze meets eyes. Emotionally oozing, the groove hits the soul. The music is stunning.

Twelve years later, 50 YEARS of music have blossomed into a sweet celebration.

Bonn himself hails from Illinois. Born and raised in Belleville, he’s lived in O’Fallon the past 37 years. With his gritty and soulful voice, you wouldn’t think his journey started in 1964 behind a drum kit, but that (combined with his passion for The Beatles) actually endeared him to a regional band named The Ash. There, he drummed with guys already receiving airplay on rock & roll powerhouse K-SHE 95. But alas, where did he catch the blues?

Turns out, it was all around him.

Bonn’s love for The Beatles was step one. Anyone who’s followed the group knows about their deep respect for American blues and R&B. Thanks to that, Albert and BB King soon grabbed Bonn’s ear. But when his future wife Kate caught his eye, she not only stole his heart, she made off with his soul. Or introduced him to her soul music collection, that is.

With the love of his life at his hip, and hip music moving his spirit, the late 70’s opened a new horizon. “I was playing drums with a local bar band,” Bonn laughs. “That group didn’t care if ANYONE sang. So, I just went ahead and did it.” During this time, Bonn would also sneak across the river and catch the Soulard Blues Band in south St. Louis. Watching the up and coming blues masters sealed the deal. “I realized, hey, this is what I love,” smiles Bonn. “I can do this.”

And do it, he has. Though he’s performed in STL for decades, finding Paul Bonn on record is tricky business. It’s a treasure hunt well worth taking though. Bonn’s voice has fronted the likes of Shakey Ground, Los Carnales and The Bar Room Troubadours. The talent on those recordings are both ear and eye opening: former Fabulous Thunderbirds bass guru Preston Hubbard; blues harp legend Arthur Williams; the masterful Roomful Of Blues horn section; blues guitar slingers Rich McDonough, Elliot Sowell and Ryan Waked; Soulard Blues Band tumpeter/vocalist Brian Casserely.

50 YEARS takes that to an all new level.

Right from the go, Bonn’s deepest musical memories are sparked. ‘East Side House Party’, a ruffling shuffle featuring Soulard Blues Band founder Art Dwyer on bass and Big George Brock’s fireplug Matthew Lesch on guitar, reworks the ‘juke like’ atmosphere of the young Bonn household. Back then, his mother Shirley played non-stop piano. Neighboring friends and strangers were welcomed with open arms. Likewise, the CD’s last track is none other than mama Bonn herself. Using a years old home recording of her playing Louis Armstrong’s ‘What A Wonderful World’, Paul voiced-over his vocals as a tribute to not only her, but his father Hap Bonn. Turns out it was his dad’s favorite song.

But sentiment aside, the meat and potatoes of 50 YEARS is a smorgasbord of rhythm and blues. The stylistic range shines. For example, Bonn uses Brian Curran’s intricate slide to lay out a bluesy Mississippi Fred McDowell like take on the gospel ‘You Gotta Move’. Yet, dance shoes really start moving a little later. Anchored by Bonn’s touring core of John Higgerson on guitar (David Dee), son and producer Derek Bonn on drums (Jeff Chapman, Los Carnales) and Sharon Foehner’s wonderful bass (James Crutchfield, Bennie Smith, Tommy Bankhead, Rough Grooves), ‘Here It Comes Again’ is a titilating groove of positivity. Driven by the warmth and excitement of Foehner’s bass and Higgerson’s axe, their interplay might be the funkiest blues groove of 2017. And the fun still runs red lights from there. Songs like ‘Uncle Jim’s Wine’, ‘Hypnotized’ and ‘Centerville Boogie’ burst with juke joint frolic. But ‘Packin’ House Blues’ might hold the deepest merit. Having spent the better part of his life literally working the “killing floor’, Bonn and company grind a marching rhythm that wears down dance shoes just like he used to wear down his own working boots. And of extra special note, the Otis Rush styled ‘I Still Believe I Can’ not only carries the weight of personal aspiration, it’s graced by the great bass of STL blues legend Gus Thornton (Albert King, Marquise Knox, Kim Massie).

50 YEARS is truly a celebratory present. Bonn’s songwriting is strong, earning deep respect. So much respect in fact, it seems half of St. Louis’ blues talent came out to play with him. Among those I haven’t already mentioned are: Tom Slim Louis (bass), Jeff Sheehan (guitar), Frank Bauer (sax), Sal Ruelas (bass), Alice Monroe (background vocals), Matt Davis (keyboards), and Paul Niehaus IV with Jon Erblich (bass and harp respectively) on ‘Stop The Killin”, a featured track on the St. Louis Blues Society’s 16 IN 16 release.

It’s hard to fathom that I first saw Paul Bonn sing twelve years ago. The exuberance and passion of that first night has aged both skillfully and gracefully. 50 YEARS is a pure testament to that growth. An absolute must listen, this is a St. Louis blues release of unique historical value. Great sounds await. Let’s just hope we don’t have to wait to year 100 for the next offering. Enjoy!! And don’t miss out on the live shows coming up!

Singer/songwriter Paul Bonn has been entertaining audiences in the Midwest for over 50 years now. Based primarily in St. Louis, MO, he and his band, the Bluesmen, have carved out a solid reputation playing a mixture of blues, soul, R&B and Cajun songs. At The House Of Blue Lights is something of a departure for Bonn, however, because, despite being recorded at The House of Blue Lights studio in St. Louis, the album has a distinct Texan edge to it, due in no small part to the musicians who appear on it.

ATHOBL is a relatively short album, clocking in at just over half an hour, but it’s also a vibrant, exciting recording that rewards repeated listening. Bonn has an enticingly rough-edged voice that suggests that not only has he been there and done it, he may also have been the first one to do so. He sings with a winning vulnerability on “Katy” while also sounding like he knows exactly what sugar coated love is on the track of the same name. Featuring three original tracks and seven well-known covers, there was a risk that ATHOBL would come across as a lazy jam, quickly recorded and released. Instead, it comes across as fresh, coruscating and exhilarating.

The core band is absolutely outstanding. The first rate rhythm section of Sal Ruelas on bass and drummer Derek Bonn (who also did a fine job on recording and mixing the album) may be natives of St. Louis, but Chris Ruest is one of the most respected guitarists in Austin, Texas, and the tragically now-departed Gene Taylor lived in the same town for many years, including a 13-year stretch as pianist for the Fabulous Thunderbirds.

ATHOBL is one of Gene Taylor’s last recordings and that makes it worth the purchase price alone. He sprinkles his magic mojo dust over the songs, constantly engaging and delighting the listener. His solo on “Katy” is a case in point but the jaw-dropping jump blues instrumental “Jump And Boogie” shows a man playing with verve, fire and a large slice a humour, which only makes his untimely death all the more heart-breaking.

Taylor and Ruest played together for many years in various different ensembles, and Ruest’s classic jump blues and Gulf Coast guitar tones fit the songs on ATHOBL and Bonn’s voice perfectly, contributing real depth to the sound. His solo on “Rocket 88” is a textbook example of how to play a memorable guitar solo that adds to the song without over-powering it. Like all the great Texas blues guitarists, he plays with a sparse yet deeply emotional approach, always leaving the listener wanting more.

Various guest musicians also contribute mightily to the success of the recording. R.J. Mishco adds harmonica to “Bright Lights, Big City”; Mike Buck and Eve Monsees contribute drums and guitar to four songs; Frank Bauer and Ian Buschmann add sax and Alice Monroe provides backing vocals. One of the many highlights of the album is “Sugar Coated Love”. Buck of course also played drums on the superb T-Birds version of the Lazy Lester classic back in 1980, while the guitar interplay between Monsees and Ruest is enthralling (likewise their entwined guitars on “I Can Tell”). Indeed, early T-Birds is not a bad reference point for the album, with the original “I’m Sorry Baby” being a song that would fit nicely into any set list by the T-Birds, the Solid Senders or early Mike Morgan.

Listening to At The House Of Blues Lights is like wandering into a random club in a small town and having your socks blown off by a band playing classic blues songs with high technical command, deep emotional adherence, and complete commitment. Highly recommended.

“Paul Bonn and The Bluesmen are a rock-solid machine of blues grooves that are sure to please. Paul Bonn is a consulate performer who brings his all to every word of what he sings.”

“Paul Bonn and The Bluesmen specialize in the beautiful, gritty, urban/rural sounds that are the St. Louis blues, with the best elements of Texas, Chi-Town, and Louisiana Gulf Coast blues “n” soul “n” roll along for the ride. This is a trip you just shouldn’t miss.” 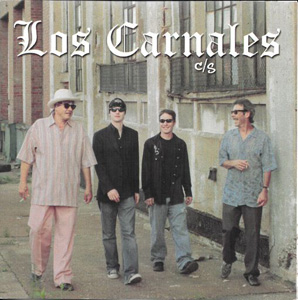 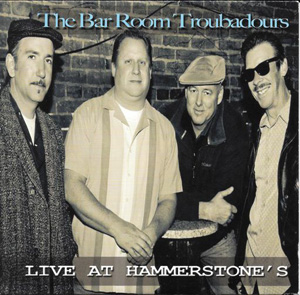 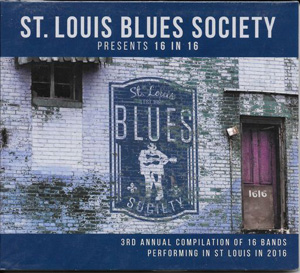 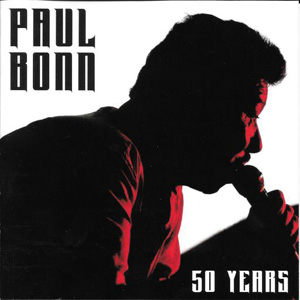 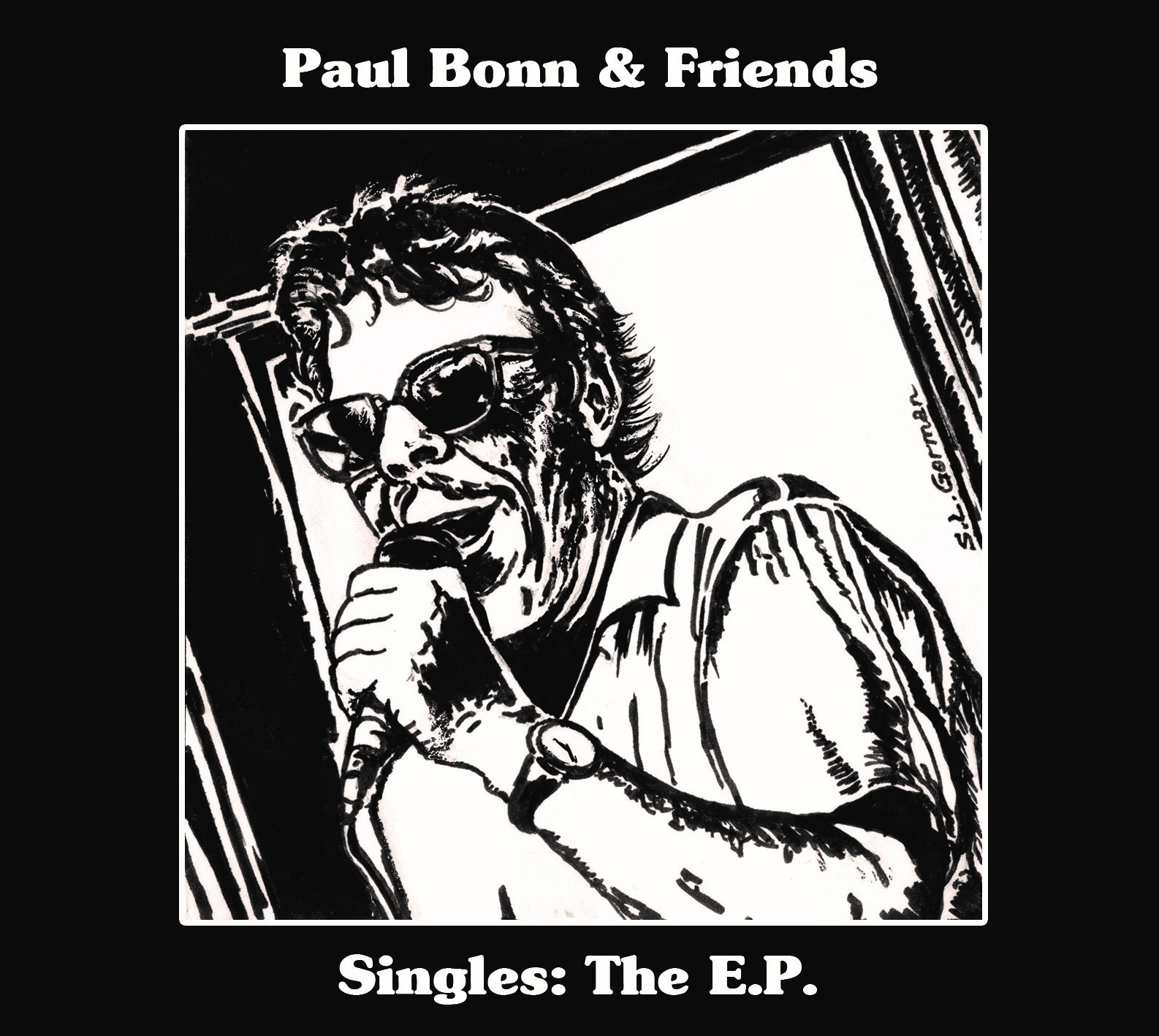 Paul Bonn and The Bluesmen · At The House of Blue Lights

Go to your SHOPPING CART!